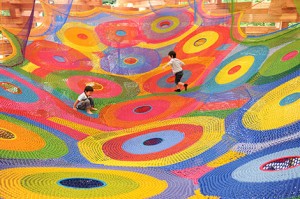 Toshiko Horiuchi Macadam, one of Japan’s leading fiber artists, was exhibiting her crocheted Multiple Hammock #1  when two children entered the gallery and, blissfully unaware of the rules that govern the display of fine art, asked to sit in it. The artist watched nervously as the children climbed into the structure, but then was thrilled to find that the installation took on new life – swinging and stretching with the weight of the small bodies, forming pouches and other unexpected transformations. Above all were the sounds of utter delight as the children discovered their new play space. And the artist was led to create her CROCHETED PLAYGROUND in HAKONE SCULPTURE PARK, SAPPORO, JAPAN.  (Story credit: Playscapes) 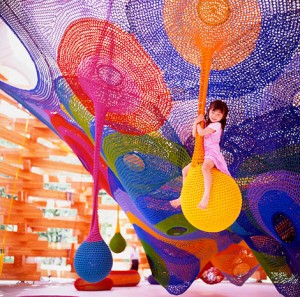 “Children became part of her crocheted sculpture, activating it, stretching it, redefining it with their play. (Macadam’s) willingness to let kids touch and actually play with and on her sculpture marks her as an unusually open, and patently brave artist. Her ability to perceive how the children became part of her sculpture, completing it in ways she had never imagined, shows her mastery of the playful path.”  Bernie DeKoven, Major Fun

Are you an anonymous “bomber”?  Do you know how/where yarn bombing started?
Wondering, too,  is this something locals can safely add to neighborhood playgrounds?