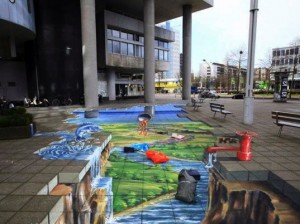 This article, written by Amanda Coen, 03/22/12, as seen in ecouterre.com, is reproduced below in its entirety.

Yes, your eyes do deceive you. Greenpeace activists conspired with Planet Streetpainting artists to create a mind-bending optical illusion at the World Fashion Centre in Amsterdam on Tuesday. The occasion? The release of the environmental nonprofit’s third “Detox” campaign report—fittingly dubbed Dirty Laundry: Reloaded—which uncovers evidence that consumers of brands like G-Star,  Abercrombie & Fitch, and Calvin Klein, are unwittingly polluting the world’s public waterways with every load of laundry.

Greenpeace researchers measured, for the first time, the percentage of hazardous chemicals that washed out from 14 clothing items during typical domestic laundering. Particularly of interest were nonylphenol ethoxylates (NPEs), a class of chemicals known as alkylphenols (APEs) that break down to form hormone-disrupting nonylphenols.

All 14 samples showed lower concentrations of NPEs after they were washed during typical domestic laundering.

All 14 samples showed markedly lower concentrations of NPEs after they were washed. The biggest offenders were H&M and Ralph Lauren, which tied at 94 percent for NPEs washed out, followed by Adidas (90 percent), Abercrombie & Fitch and Nike (tied at 88 percent), Calvin Klein (84 percent), and Converse (57 percent).

“This study suggests that all residues of NPEs within textile products will be washed out over their lifetime and that in many cases this will have occurred after just the first few washes,” the report reads. “These NPEs are then discharged to wastewater treatment plants, which do not effectively treat or prevent the release of these hazardous substances into the environment.”

Unlike polluted discharges from textile plants in China, India, Sri Lanka, Vietnam, and the Philippines, the washing of finished garments can take place anywhere on the planet, including the United States, Canada, and the European Union, where legislation restricts the use of NPEs.

Greenpeace calls for lower limits on toxic substances both at the respective apparel brands and for product standards such as Oeko-Tex.

Greenpeace calls for lower limits on toxic substances both at the respective apparel brands and for product standards such as Oekto-Tex. The group admits, however, that such a step, taken in isolation, would not necessarily prevent emissions of APEs. “Suppliers could attempt to achieve a lower level of APEs in the final product by additional rinsing,” it says, “thereby increasing the discharge of these substances into rivers, lakes, and seas in the manufacturing countries.”

The solution, then, is for brands to eliminate the use of APEs throughout their supply chains. Six major clothing labels—Puma, Nike, Adidas, Li-Ning, H&M, and C&A—have pledged to develop and implement a roadmap towards zero discharge of hazardous chemicals. But here’s the rub: The roadmap does not include specific commitments or deadlines. Greenpeace wants the brands to eliminate at least the major uses (scouring, degreasing, and detergents) of APEs in their supply chains by the end of 2012, with the complete elimination of all uses by the end of 2013.

Consumers, who are unknowing accomplices in the cycle of pollution, can play their part, as well. Besides petitioning global brands to act responsibly, we can also lower the impact of our clothing by reducing consumption, repurposing existing items, and buying secondhand or vintage whenever possible. “A future free from toxic chemicals is possible,” Greenpeace says.”Together we can help create it.”