The World Was Supposed to End Last Week. 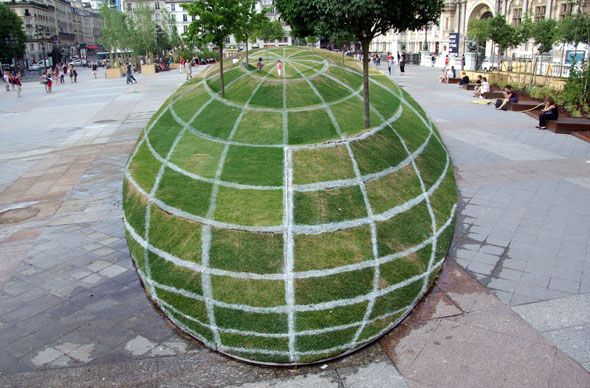 A grassy 3-D slant anamorphosis optical illusion globe entitled “Qui Croire?” (“Who to Believe?”),  designed by French artist François Abélanet to focus attention on environmental issues, was to have been removed from in front of Paris City Hall last week.

While Abélanet’s green world is probably gone, the earth’s environmental issues remain, as does this fascinating 2 minute video of his assembly process. (My French is rusty, so I sometimes watch with the sound off.)

The project, installed on a flat lawn in front of Paris City Hall, was created to look like a giant sphere from a certain view point. Assembled by 90 people over a five day period, the installation was about as long and wide as a football field. It used 600 cubic meters of sand and hay covered by 300 square meters of sedum.

I’d love to hear about anamorphic installations this side of the pond. Know of any?