A Morph-O-Scope is an optical illusion toy inspired by an ancient device called an “anamorphoscope”. The device has two parts: a mirrored cylinder (the decoder) and an unrecognizable, twisted drawing (the morph). When the decoder is positioned on a morph, it untangles the drawing and “mirror-aculously” reflects it as a normal picture.

What's the history of anamorphosis?

The Chinese Invented it! Leonardo daVinci Loved it!
Spies Snatched it Up! We Rock it!

Did you know that morphing is actually an ancient optical illusion trick? More than 500 years ago, about the same time Columbus was crossing the ocean, in China a special mirror device was created that came to be called an “an-a-morph-o-scope”. The astonishing invention was then presented to Sultan Ahmed I of Constantinople, and from there it was brought to the attention of Leonardo da Vinci and other Italian Renaissance artists.

Love at first sight
In the 1550′s, Renaissance artists were just figuring out how to create the illusion of depth – 3-D – on a flat 2-D canvas. They were entranced by the anamorphoscope’s astonishing visual magic. Spies of the time were also smitten and they grabbed the concept as an excellent way to disguise dangerous messages. (Pssst … You need the right size mirror with the proper curve to decode the morphed images.)

Carefully guarded secrets
The secret method for creating morph pictures and the secret formula for making bright glass mirrors (mirrors were all rather dark until then) were very well protected. In fact, the formula for bright mirrors was so valuable to the glass makers of Italy, that stealing it or taking even a tiny piece of broken mirror was punishable by death. Really!

The technology for making bright mirrors eventually developed in other countries, and for the next three centuries anamorphoscopes were the “ooh and ahh” toy in Europe and the Orient!

Why do I need a mirror and what's the difference between them?

Mirror Decoders correct the wacky, morphed drawings and reflect them as fun, recognizable pictures. There are 2 types of Mirror Decoders. Both give picture-perfect reflections. Both are scaled to work perfectly with your letter-page-sized morphs. Both are totally child-safe. See the next FAQ for how to assemble.

How do I assemble a mirror decoder?

There are two types of Mirror Decoders. Both types assemble in just seconds!

The Self-Hooking type of Mirror Decoder

1. CURL the mirror into a cup shape
2. OVERLAP the sides
3. HOOK them together. Ta Da!

The Moisten-&-Overlap type of Mirror Decoder

1. CURL the mirror into a cup shape
2. MOISTEN along one straight edge
3. OVERLAP the other straight edge 1/4″
A bit of physics magic here! No adhesive needed. The moistened mirror gently clings to itself. Easy to reposition!

FOR EXTRA SUPPORT instead of overlapping itself, the Moisten-&-Overlap type of Mirror Decoder can be wrapped around a standard smooth-sided (no ridges) 10oz or 12oz paper or plastic cup.

Are the mirror decoders and crayons child-safe?

All Morph-O-Scopes Kits, Packets, and Party Fun Packs components meet or exceed the highest US toy safety standards. OOZ & OZ products are manufactured entirely in the United States and have always been totally child-safe. 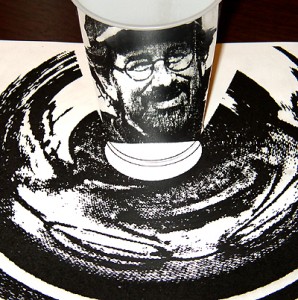 Need a WOW? Maybe laugh-out-loud warped heads of your friends (or your boss), or your bar mitzvah boy? Looking for unique, interactive ice-breakers? Need an engaging premium for your young restaurant customer? Want a riveting tabletop keeper for your marketing campaign? Or a positively eye-catching commercial display? We can do that for you. From photos or art. In black and white or full color. Any size. Mirror reflectors from cup-size to architectural column.

One of our clients had us morph his company logo and enlarge it to create a sensational lobby installation that reflects in the mirrored base of his receptionist’s desk.

A marketing pro has us morph photos of each incoming

president of her client’s medical association – and she uses a bright, shiny cocktail shaker as the Morph-O-Scope reflector!

Contact us and we’ll be happy to discuss the possibilities.

Can I order just the separate morphs I want?

With our new Pick a Morph option! Simply scroll, view, and choose from over 100 morphs in our collection

I have questions about purchasing

We’ve got you covered. Visit our Retail Customers Info page for a printable catalog and answers to your questions about ordering, shipping, payment, etc.